Like most people in the US, Jesse Jacobsen has eclectic roots. Pastor’s paternal grandfather was an immigrant from Norway, but on his mom’s side, he is something like a 5th-generation Arizonan. After his high school experience in Massachusetts, he went to Colorado to attend the U.S. Air Force Academy (class of ’93). His intent at that time was to become a pilot.

The Academy was a challenging, formative, and sometimes shocking, experience. After a summer of basic training, Pastor Jacobsen had the pleasure of playing first baritone in the Drum and Bugle Corps. The Corps would travel with the football team (very successful at the time) and often stay with local officers’ families for a few days. He got to see a number of bases around the country and talk to his hosts. Over that first year, he gradually experienced a growing sense of responsibility instilled by his former pastor from Rumford, Rhode Island. Pastor Kehl had informed the young Jacobsen that his gifts would be helpful for a minister, and he should consider serving God in that way. By the end of the first year at USAFA, he had decided that was his greater duty. It was a stressful decision, because he was still interested in flying and serving his country, but had realized that there is a more pressing need among those who serve: to have pastors or chaplains who not only appreciate their situation but are also uncompromisingly faithful to God’s Word.

It was disheartening to see that even though military chaplains honestly did their best to serve their flocks, contradictions and tensions remained between incompatible faiths. The requirement for chaplains to serve everyone tends to weaken what is taught in spite of the best intentions. But the Wisconsin Synod (WELS — his church body at the time) assigned civilian pastors to nearby military posts. Because they are not as integrated, they have more freedom to teach and preach according to God’s Word in every circumstance. Jacobsen thought that might be a good option.

At Northwestern College in Watertown, Wisconsin, Pastor received a solid foundation in the Biblical languages (Greek and Hebrew). He also studied some German and Latin, as well as other liberal arts subjects. It turned out that his Academy credits for the first year of science and math already exceeded the requirements at NWC. This allowed him to take extra make-up courses that were needed due to his attendance at public schools throughout his career, and still graduate after four years (in 1994). While at NWC, he sang in the choir, played in the band, helped form a pop/rock band with some friends, took some piano lessons, and most importantly, met Erica Bode. 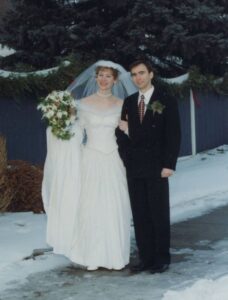 Pastor’s Norwegian Lutheran family heritage and an attraction to a smaller school environment led him to enter Bethany Lutheran Theological Seminary in Mankato, Minnesota. Most NWC graduates go on to the WELS Seminary in Mequon, Wisconsin. Partway through his second year, his college sweetheart, Erica, became his beloved bride. She  supported them as he finished school. The fourth year of instruction was a vicarage at Mount Olive Lutheran Church in Mankato, under Pastor Don Moldstad (now chaplain at Bethany Lutheran College). When he graduated from BLTS in 1998, Pastor was assigned to serve Grace Lutheran Church in Madison, Wisconsin. Just before being ordained there, Erica and Pastor took a few weeks for an overseas trip to Norway. There he had the privilege of bringing greetings from the ELS to the Lutheran Confessional Church (LBK) of Sweden and Norway, the pleasure of connecting with some of his distant roots there, and the great privilege and pleasure of getting to stay and visit with some wonderful people.

Pastor Jacobsen served in Madison, WI from 1998 through 2005. During that time the congregation started a preschool, and Erica was an important part of its organization. In late 2005, he accepted a call to the Pacific Northwest. From 2006 until 2020 he lived in The Dalles, Oregon, serving Concordia Lutheran Church in Hood River and Bethany Lutheran Church in The Dalles as a dual parish. During that time they home-schooled their five children. With the older three, Pastor took several years of Tae-Kwon-Do and also joined them in a homeschool band to play trumpet, trombone, fluegelhorn, or baritone with the same children.

In 2014 the church in The Dalles decided to start an elementary school including grades 1-4. Two years later it was time to expand to upper grades with another teacher who could serve permanently as principal. It was difficult to find a teacher comfortable with being principal of a classical school, an expansion project, and a move to the West. It was easier to call a new pastor. So the church decided to extend the teacher/principal call to Pastor Jacobsen, and then call a second pastor to serve the needs of the parish. It was a very challenging prospect, and though he loved parish work, the needs of the church, school, and family led him to accept that call.

God blessed the transition to full-time teaching, answering many prayers. Still getting occasional opportunities to conduct services and preach, Pastor Jacobsen was happy to find that with God’s blessings he could teach when it was needed, and even serve as principal. He enjoyed the teaching, but it wasn’t the work he had prepared for. Another blessing at this time was serving with Pastor Lawson, whose interests and strengths in the ministry are music and liturgics. Serving with him allowed Pastor Jacobsen to develop an understanding of our Lutheran heritage in these areas and reach a much deeper appreciation for the basic elements that distinguish a Lutheran approach to church services from those of other traditions.

When C-19 hit in the spring of 2020, nobody knew how to deal with it or what to expect. Suddenly the Oregon governor said schools must not meet in person, so over a long weekend, the school staff began preparing an asynchronous approach to delivering lessons online and exchanging materials at school. This met with success, but only for some students in the remainder of that semester. After exploring many possibilities, the school board finally had no good choices available. Rather than focus on institutional survival, the board decided to cease operation for the 2020-2021 school year. This freed Erica and Pastor from ongoing responsibilities there, and she received a one-year call to teach at Lakewood. 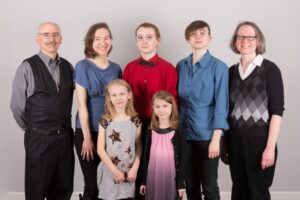 The Jacobsen family moved to Lakewood in August 2020, and Erica began teaching at Lakewood Lutheran School. The one-year call was a good fit because nobody knew how well things would work out, especially in the pandemic. Thankfully, things have worked very well. Pastor Jacobsen helped the school by providing weekly chapel separately for each classroom. Meanwhile, he decided to use some of his extra time to enroll in a master’s degree program at the online Institute of Lutheran Theology in Brookings, SD. He may graduate with a Master’s in Sacred Theology (STM) in another two or three years. In February 2021, Lakewood Lutheran Church extended a permanent teaching call to Erica as well as a part-time or bi-vocational pastoral call to Pastor Jacobsen. Both calls were accepted, and the Jacobsens have continued their family’s transition from Oregon.

Pastor Jacobsen’s current interests as a pastor in Lakewood are:

Pastor Jacobsen looks forward to spending some time getting to know you and learn how he can best serve Lakewood Lutheran Church and School and the Lakewood community. The Lord be with you!